Income investors have a number of available dimensions in their allocation such as across asset classes and industries. One, possibly, overlooked dimensions is the capital structure dimension. In other words, investors can allocate to common shares, preferred shares, and debt of the same issuer. In this article, we focus specifically on the risk-and-reward of common and preferred shares of a number of different income sectors such as fixed-income CEFs, CLO equity CEFs and mortgage REITs.

Our main takeaway is that the traditional mantra of high-risk/high-reward often breaks down, leaving the common shares of various securities with subpar yields and/or longer-term returns versus their preferred counterparts. In many instances, common shareholders are left holding the bag on all investment vehicle fees as well as the bulk of volatility and drawdowns while also bearing the risk of distribution cuts and deleveraging without superior performance or higher yields than their preferred alternatives to compensate for this downside.

There are about half a dozen of fixed-income CEFs (ex-CLO equity funds) with preferreds outstanding. One is the Highland Income Fund (HFRO) that is popular with many income investors due to its high distribution rate of 8.72%. The NAV net investment income yield of HFRO, however, is significantly lower at about half of the headline yield or 4.42% once you strip out preferred dividends with the price NII yield equal to 5.68% due to the wide discount. The fund’s only preferred – the HFRO 5.375% Series A (HFRO.PA) has a call date in 2024 and is trading at a clean price of $25.86 with a yield-to-worst of 4.34%. What makes this pair very curious is that the preferred has a yield that is very similar to the NAV NII yield of the fund itself and is only 1.3% below the price NII yield.

Obviously, the potential return profiles of preferred and common shareholders are very different with preferreds shareholders having little, if any, upside. However, at least for HFRO, common shareholders are still waiting for the upside of bearing an additional set of risks. The chart below shows that the fund’s price and NAV returns have spent most of their time below that of the preferred. The fund has operated prior to the IPO of its preferred in 2019. However, returns since inception are just as uninspiring at around 3.5% CAGR in total NAV terms and around -5% CAGR in total price terms. And with market valuations on the rich side, it’s not obvious that HFRO common is going to blow away the preferred from here on as much of the juice in credit markets has already been squeezed. It also suggests that the 3.5% NAV return since inception is a much better forecast of the amount of income that the fund can actually generate (which is echoed by its current net investment income) than its headline distribution rate of 8.72%.

The key takeaway here is that HFRO common not only generates a similar NII yield to that of the preferred but it has underperformed the preferred pretty consistently. This makes the common a difficult security to recommend for income investors over the preferred.

There are a number of other examples in the fixed-income space where yields and/or returns of common shares aren’t particularly attractive over their preferred counterparts. For example, the RiverNorth/DoubleLine Strategic Opportunity Fund (OPP) NII price yield is around 6.1%, which is already about half its distribution rate of 12.66% and not a much larger than the 4.63% yield on its preferred. However, in our view, even the 6.1% figure is overstated due to the fund’s allocation to MBS and other CEFs. The common shares have outperformed the preferred since the IPO of OPP.PA in 2020.

The situation is a bit worse for the RiverNorth Specialty Finance Corporate (RSF) which appears to have a mid-single-digit yield (it’s hard to tell since its distribution source breakdown is not consistent with its Section 19a’s which imply a NII yield of around 5-6%). The fund has generated returns since inception of around 2.28% CAGR in NAV terms and 0.50% in price terms through the end of 2020 – a far cry from its 10.31% distribution rate and is primarily due to its very high fees and high financing costs. The subpar common share returns are in contrast to the preferred which currently has a 5.82% stripped yield and is trading over par (in other words, has generated returns above its coupon of 5.875%). The stock is currently callable, so acquiring it at the current price does bear the risk of redemption, but it can occasionally be bought at a price very close to par in clean price terms which minimizes the negative hit from the redemption.

The CLO equity fund space is very small at just 3 funds. However, it attracts an inordinate amount of income investor attention due to the double-digit distribution rate, on average.

All three funds only use senior securities as their borrowing instruments, primarily because typical bank-facing leverage instruments like repo and credit facilities are inappropriate for the price dynamics of the underlying asset class. One of the three funds in the sector did use repo as part of its borrowings coming into the crisis but was forced to deleverage in March and has not reinstated the line.

The Oxford Lane Capital Corp (OXLC) is the longest-lived of the trio – the chart below compares the price performance of the common shares of OXLC with its currently outstanding preferred stocks. The chart starts with the earliest data point for which we have data for both the common and at least one preferred stock. 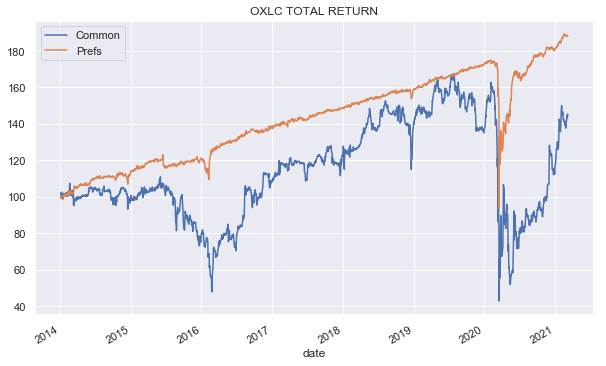 Historically, OXLC has offered a consistent and significant pickup in yield over the preferreds – at the moment that pickup is around 5% or 12.3% for the common shares and, on average, around 7% for the preferreds. However, what the chart above shows is that this large yield advantage has not actually translated into superior long-term performance. In other words, the yield was “borrowed” from the fund’s asset base. What this means for investors is that the high yield of CLO equity funds has been somewhat illusory and has failed to translate into actual performance.

Many investors state that they don’t care a whole lot about “total returns”, rather they focus on the “cold hard cash”. However, the best way to grow income is to preserve one’s capital base. Ultimately, higher yields in the short term can actually translate into lower long-term income through capital destruction.

The other two funds don’t look very dissimilar from the OXLC chart above. Below is the same picture for the OFS Credit Company (OCCI) – the only fund whose common share price return has outperformed that of the preferreds and only marginally and primarily due to the fund’s premium recently rising into the double digits.

The point of this section is not to say that CLO Equity CEF common shares are uninvestable. The point is that the common shares of these funds have not lived up to their high stated yields, whether that’s from historical bouts of deleveraging, bad luck, very high fees or manager skill. This means that investors should mentally haircut the high stated yields of these funds since their performance has not reflected it. And, needless to say, the common shares of these funds have delivered their unimpressive returns amid volatility and drawdowns that are much larger than that of the preferreds. While some investors have made a ton from tactical allocations to these funds, a through-the-cycle allocation has not matched the high distribution rates.

Mortgage REITs have been and remain very popular income vehicles. Let’s have a look at how some of the more popular mREITs have performed, breaking down their common vs. preferreds performance. As before, we start the chart with the first data point where we have both common and preferred data. Historically, common shares in the sector have delivered higher dividend yields than their preferred counterparts, though as we see below, this came at the cost of eroding book values.

Annaly Capital Management (NLY) is arguably the most well-known mortgage REIT with a strong agency focus and a small allocation to credit-risky assets. The common shares had a decent 2020 as the company’s business model and portfolio proved fairly robust. For a few years prior to the COVID crash, the common had been outperforming the preferreds but the recent volatility has pushed it under.

AGNC Investment Corp. (AGNC) is another large agency-focused mREIT. The performance picture is quite similar to NLY though the common has tended to underperform the preferreds prior to the COVID crash as well.

Dynex Capital (DX) – another agency-focused mREIT – is generally regarded as a very-well managed company which had mostly sidestepped the March dislocation. The longer-term performance is actually a bit worse than that of NLY or AGNC, particularly in the years leading up to 2020 though since then the common has closed some of the gap with the preferreds.

Most hybrid-focused mREITs really took it on the chin in 2020 with book values collapsing and failing to recover a whole lot. For example, the relatively large Two Harbors Investment Corp. (TWO) had a very tough 2020 and ended up pulling management internally and moving to an agency-focused portfolio. The performance picture speaks for itself.

It’s not all grim for mREIT common shareholders, however, as a couple of non-agency mREITs have done very well. The Pennymac Mortgage Investment Trust (PMT) has beaten its preferreds – chart below – as has the Arbor Realty Trust (ABR). What’s interesting is that both have somewhat idiosyncratic business models that differentiates them from the rest of the sector which is more focused on leveraging mortgage securities.

The sector takeaway here is that common shares of mortgage REITs have struggled against their preferreds. Again, this doesn’t mean that the common shares are uninvestable – it’s just that the rule-of-thumb that higher-risk/higher-yield generates a higher return doesn’t always work in practice. In other words, the typically higher dividend yields of common shares have come at the cost of principal erosion. This suggests that investors should haircut common dividend yields somewhat relative to what is available in preferreds.

Investors who are very good at picking out the better-performing stocks can, of course, do very well and handily beat the returns of the preferreds. It is also possible that there is a selection bias in the population of mREITs that have issued preferreds (as not all have) which might make sense since preferreds tend to be fairly expensive forms of financing. Finally, common shares have much more potential upside, something that preferreds tend to lack due to their embedded calls. Going forward, it is certainly possible that the performance of common shares of mREITs may begin to improve their performance against the preferreds. This may be due to the fact that preferreds prices are already elevated and, more importantly, the preferreds are getting refinanced at lower coupons leaving less coupon income for preferreds shareholders going forward.

Check out more in-depth and timely commentary as well as Income Portfolios and interactive Investor Tools at our Premium service.

ADS Analytics LLC / Systematic Income provides opinions regarding securities and other related topics on an impersonal basis; therefore no consideration is made towards your individual financial circumstances.

All content presented here is not to be regarded as investment advice or constitute a client / advisor relationship. It is for general informational purpose only.

Trading securities involves risk, so you must always use your own best judgment when trading securities. You assume the entire cost and risk of any trading you choose to undertake. You are completely responsible for making any investment decisions.