Financial markets have continued to rally after the March drawdown. With income asset yields falling seemingly every day, it is tempting for investors to respond to this trend by reaching for yield and taking on more risk to sustain or boost their income levels. In this article, we take a look at the value of maintaining a portion of an income portfolio devoted to more defensive assets. Doing so may feel like a sacrifice of both income and total returns, however, this does not have to be the case. Because volatility is a persistent feature of markets and the fact that income assets, particularly CEF prices and discounts, tend to mean-revert, having the ability to rebalance from more to less defensive assets during periods of volatility can lead to outperformance in the longer term with respect to both income and total returns. This is precisely why we maintain varying allocation levels to defensive assets across all of our model income portfolios.

When faced with the yield landscape of income assets, it’s tempting to always go for the higher-yielding options, particularly for the higher-octane CEFs – after all more is better than less, right? In investing, this is not necessarily the case, however. This is because doing so carries three implicit costs that are obscured by high yields.

First, is the risk of permanent capital and income loss. One way to visualize this risk is to compare the drawdown performance this year of CEFs according to their current yields at the start of the year. The chart below plots January current yields on the y-axis and price drawdown on the x-axis. It is no surprise that there is a clear relationship – CEFs boasting the highest yields are typically allocated to more volatile and cyclical assets and they tend to carry more leverage. And it is these funds that take the most beating during periods of volatility.

Steep drawdowns have two important implications for investors – one on the fund level and the other on the behavioral level. On the fund level, larger drawdowns are more likely to cause the CEF to deleverage. This is something we saw particularly in the MLP and CLO equity CEF sectors, as well as many, many other sectors. Deleveraging by a CEF makes it more difficult to recapture lost ground when asset prices turn up. An example of this is shown below where sharp falls in asset prices resulted in deleveraging of the Kayne Anderson MLP and Midstream Fund (KYN) making it unlikely for it to regain the ground lost to an open-end fund alternative.

Another fund-level consequence of deleveraging is something we call the chance of permanent income loss. Because deleveraging results in the fund carrying fewer assets, its earnings profile can remain muted for an extended period of time, resulting in a low-yielding asset on the investor’s original cost basis.

A personal consequence of a large drawdown has to do with behavioral implications of investing. Few of us can load up the portfolio with supercharged funds and calmly sit through drawdowns of 50% or more. Many will be tempted to sell close to the bottom and suffer the consequences of lost wealth for many years to come. Having a plan to move the portfolio towards a more defensive stance helps just by having a plan. It also helps by lowering the volatility and drawdown potential of the portfolio making it less likely for us to hit the sell button at the worst time.

The second implicit cost of holding an entirely aggressive CEF portfolio has to do with the rebalancing opportunity cost. A defensive portion of a portfolio enables an investor to reallocate to higher-octane securities during periods of drawdowns such as the one we have seen in March of this year and in December of 2018. This type of rebalancing can ultimately generate higher total wealth and hence higher levels of income since fixed-income markets tend to be fundamentally mean-reverting. In the section below we see how this can work in municipal funds.

Rebalancing Can Boost Income and Returns

It might seem impossible for a slightly more defensively positioned portfolio to produce higher levels of income and higher through-the-cycle returns than a more aggressive portfolio. After all, CAPM tells us that higher returns come with higher risk – just look at what the Nasdaq has done relative to the Dow!

Income assets, and in particular, CEFs are different, however, for two main reasons – mean-reversion and discounts. Let’s take a look at an example and compare the Nuveen High Yield Municipal Bond Fund (NHMAX) and the Nuveen Municipal High Income Opportunity Fund (NMZ). The former is a mutual fund that has a distribution yield of 4.95% (SEC yield for August is 4.29%). NMZ is a CEF with a 5.43% current yield and a covered yield of about 5.10%. The comparison isn’t perfect – there are a few differences. NMZ runs at around 36% leverage versus about 25% for NHMAX and it has about half the fund in investment-grade bonds versus about 16% for NHMAX.

These differences don’t show up much in the funds’ NAV returns which match each other fairly well over the last 5 years.

NAVs are one thing – let’s see how the price returns of these two funds have behaved over the last 5 years. 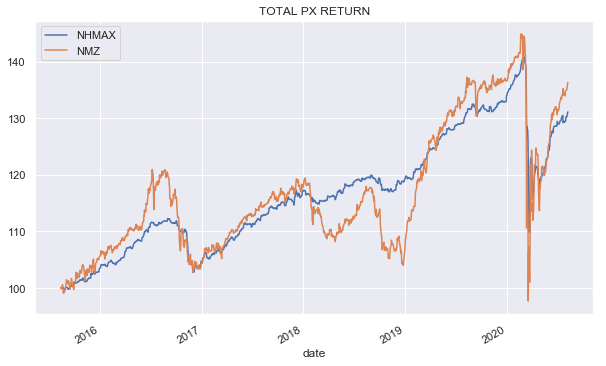 Similar to the NAV profile, the funds have ended up not far from each other but the way they got there is very different. NMZ has been wildly volatile relative to NHMAX sometimes under- and out-performing by more than 10%.

The price action over the last year in particular looks quite extreme.

This track record reveals the key fact about income assets. A small increase in yield will typically come with a huge increase in price risk. This doesn’t mean that investors should avoid the higher-yielding assets. Instead, they should keep a foot in some of the more defensive assets as well because the risk/reward for doing so is significant. In effect, this means that by having part of the portfolio in more defensive assets sacrifices a small gain now for a potentially much larger gain later on. This is because reallocating from NHMAX to NMZ during the drawdown would have increased the income-generating capacity of the overall portfolio so that the resulting portfolio could be generating more income than a portfolio that started out 100% in NMZ. Let’s see how this could happen.

The chat below plots trailing twelve-month yields for both funds. Prior to the drawdown the yield differential between the two funds was in the range of 0.1%-0.3%. At the bottom of the drawdown this widened to around 1.5%. Being able to reallocate from NHMAX to NMZ during this period effectively meant moving assets from a 0.3% headwind to a 1-1.5% tailwind. This is what we mean by being long term rather than short-term greedy.

Looking at this chart it’s tempting to say, well, you can’t build a strategy out of a once in a lifetime pandemic. And it is true that the extent of the recent drawdown was very large. But we have seen sharp discount widenings in the muni sector also at the end of 2018, in late 2016, as well as in 2015, 2014, 2013 and 2011. The precise reason why volatility comes about is often different each time – but the fact that it comes back is not at all unique.

Finally, what do we mean by defensive assets? The precise nature will vary from investor to investor – some will find NHMAX too defensive and some not defensive enough. Broadly speaking defensive assets, as they are used across our income portfolios, are those with better discount control. These can be term CEFs, open-end funds, preferred stocks or baby bonds. Because the volatility and drawdown potential of these assets are lower than their perpetual CEF counterparts, all else equal, they can be a useful starting point for investors building up a defensive portion of their portfolios.

Check out more in-depth and timely commentary as well as Income Portfolios and interactive Investor Tools at our Premium service.

ADS Analytics LLC / Systematic Income provides opinions regarding securities and other related topics on an impersonal basis; therefore no consideration is made towards your individual financial circumstances.

All content presented here is not to be regarded as investment advice or constitute a client / advisor relationship. It is for general informational purpose only.

Trading securities involves risk, so you must always use your own best judgment when trading securities. You assume the entire cost and risk of any trading you choose to undertake. You are completely responsible for making any investment decisions.